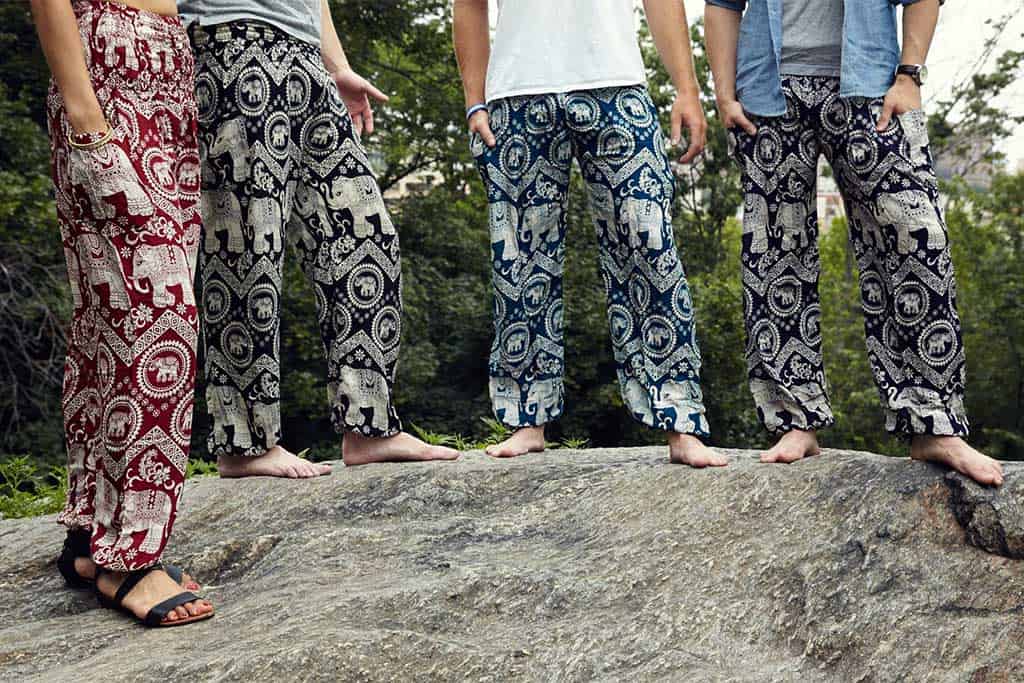 Want to know a secret? Elephant Pants aren’t even Thai!

Everyone who’s travelling in SEA ends up in them at some point, but very few people know the history of Thai elephant pants. Lucky you: You’re going to be able to share this incredible knowledge and wow your travelling friends.

Spend any time in a market and you’ll come across them. They are, essentially, synonymous with travelling in Thailand. The traditional patterns, bright colors, incredible cheapness and one size fits all has mass user appeal, and it shows. They’re everywhere. It’s one of the most popular souvenirs from Thailand backpackers bring back home.

Are they actually worth the purchase and also where on earth did they come from to grow in such popularity? Well, to learn that, we need to go back in time somewhat.

The History of Thai Elephant Pants…isn’t that Thai…

The traditional name for these pants is Shalwar, coming from the Turkish or Persian word for pants. In fact, that’s the word for pants in countries of the Middle East, some of Africa and a lot of Asia. They’re still worn by men and women across these countries as standard dress.

Around 2000 years ago, in Persia, these pants first began to come into circulation. Initially they would have been a large piece of cloth that evolved into trouser form from a more simplistic wrap style of clothing. At the time, mainly men wore these trousers as women would have worn full body, full coverage clothing. That said, there is some evidence of women wearing the pants as they served a similar purpose when combined with a full-length top.

Pants and The West

Western dress, as it evolved, began to become more and more risqué. Back in Victorian times, women would wear full-length dresses but those who wanted to show a bit of flirtation would wear elephant style pants (plainer of course) under their dresses that would show a bit of ankle. Seriously raunchy stuff.

By the time we reach the 1960’s, 70’s and 80’s pants were undergoing some serious style changes. Take the legendary MC Hammer and his pant revolution. All inspired by the traditional Harem pants. But they faded from fashion. Nowadays, you’ll almost exclusively find them available in SEA.

So why are elephant pants so popular today?

Quite simply it’s because they are very cheaply mass produced, festooned with brightly colored Thai or Asian symbols, are pretty comfortable to wear and make for a decent souvenir. If you’re after a pair for yourself then you’ve got a choice. You can go for some genuine fisherman trousers which are plainer and somewhat more robust. Or you can head for one of the major markets and invest in a pair of bright blue, bright yellow or multicolored elephant pants adorned with miniature elephants, monkeys and Buddhist symbols. We all know which ones you’re going for…

If you need a pair of elephant pants in a pinch, check out Amazon.

All Posts »
PrevPreviousHiking in Bangkok…wait, what? Introducing the Green Lung of Bangkok!
NextThe Top 3 Malls in Chiang Mai: Because Shopping is a Lifestyle!Next