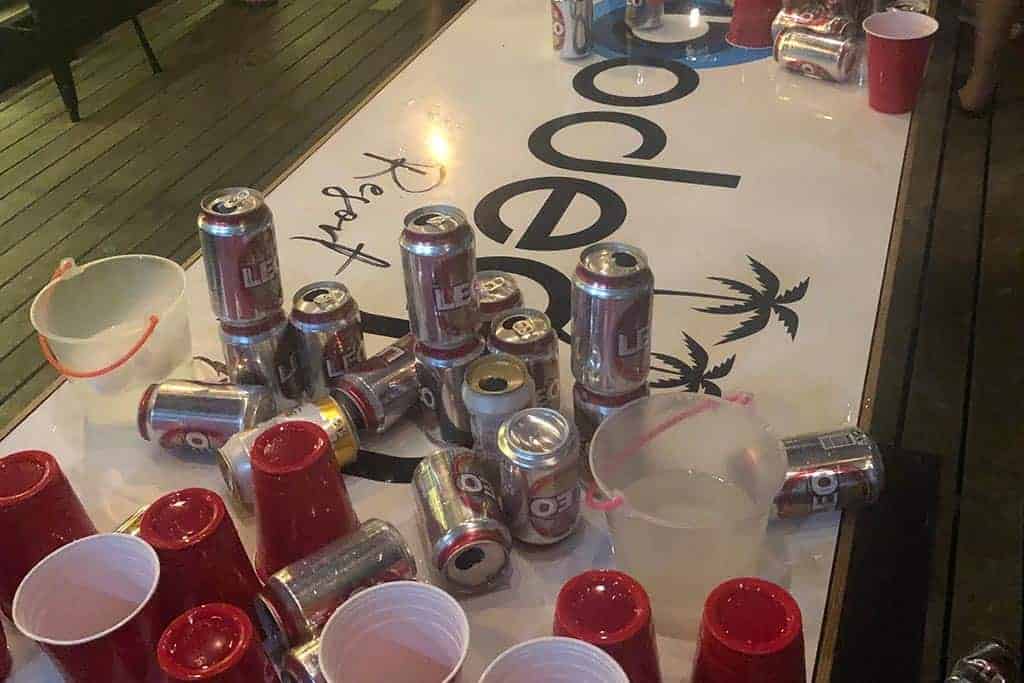 Nothing Beats Red Solo Cups for Beer Pong. Nothing.

If you’ve ever been to a party, you’ve probably drunk out of a red solo cup, and Bodega is proud to announce that we are importing red solo cups for beer pong at all of our hostels! We just don’t think it’s a party without them, and if you’re going to play beer pong then you may as well do it right.

You might think these cups pretty much only exist for frat parties, but you’d be way off the mark. They were actually invented in the 1970’s as an evolution of hygienic throw-away paper cups earlier in the century, and they could be seen gracing offices, schools and even peoples’ homes as disposable homeware became all the rage.

Fast forward a decade or two and the plastic ridges had arrived on the inside of the cups, opening the way for some pretty accurate drinks measurement and cementing their popularity at high schools and colleges up and down the land.

Did you know they measure out drinks perfectly?

It’s no accident that we’re importing red solo cups for beer pong tournaments! They’re perfect for the job- the right size, the right shape, sturdy, eye-catching and easy to fill to a consistent level. If you’re going to use the cup properly for a drink then this is how it should go:

The narrowest section up to the bottom ridge is for liquor. It doesn’t look like very much, but to be fair you’ve got to remember you’d be shooting straight booze so if you want to last longer than half an hour then this is more than enough! This is a one ounce shot if you’re interested in that kind of thing.

The next ridge up for the wine drinkers. Filling it here gives you 5 ounces of wine, a pretty good measure and probably more of a sipper than a downer if you’re using wine as your drink of choice.

Finally, if you’re going for the classic and drinking beer then go ahead and fill up to the lowest of the top ridges. This gives you a 12 ounce beer with room for a bit of a head on top, and helps you not spill your drink if it’s not full to the brim.

How We Use The Red Solo Cups For Beer Pong

When you stay with us at Bodega you’re guaranteed to get involved in a game of beer pong or two, and we use the red solo cups for all our beer pong games. We want you to survive long enough to come out with us on one of our epic pub crawls though so don’t worry, we don’t fill to the brim for every game!

For beer pong we pour to just above the wine line, meaning that two beers is perfect for a 6 cup game and you can get your buzz without emptying your whole drink, and your wallet, every time.

What WON’T we use for beer pong?

As with all classics, imitators have got involved and an abomination called the Hexcup has recently appeared. Designed to look a lot like the classic Solo Cup with a red and white color scheme and a similar plastic coating, the difference is the shape. As the name suggests, the cups are hexagonal so they fit together exactly when racked up for beer pong.

Oh, how clever hey? NO! That’s cheating, it takes away a lot of the skill of the game by removing the gaps between the cup lips and aside from anything else, it’s not tradition! You won’t find any of that shit at Bodega. If you want to play beer pong with us, you can drink for it!

All Posts »
PrevPreviousRide Sharing in Thailand: All Hail GRAB Taxi, Destroyer of Uber
Next5 Dumb Farang Mistakes You Want to Avoid While Traveling in ThailandNext