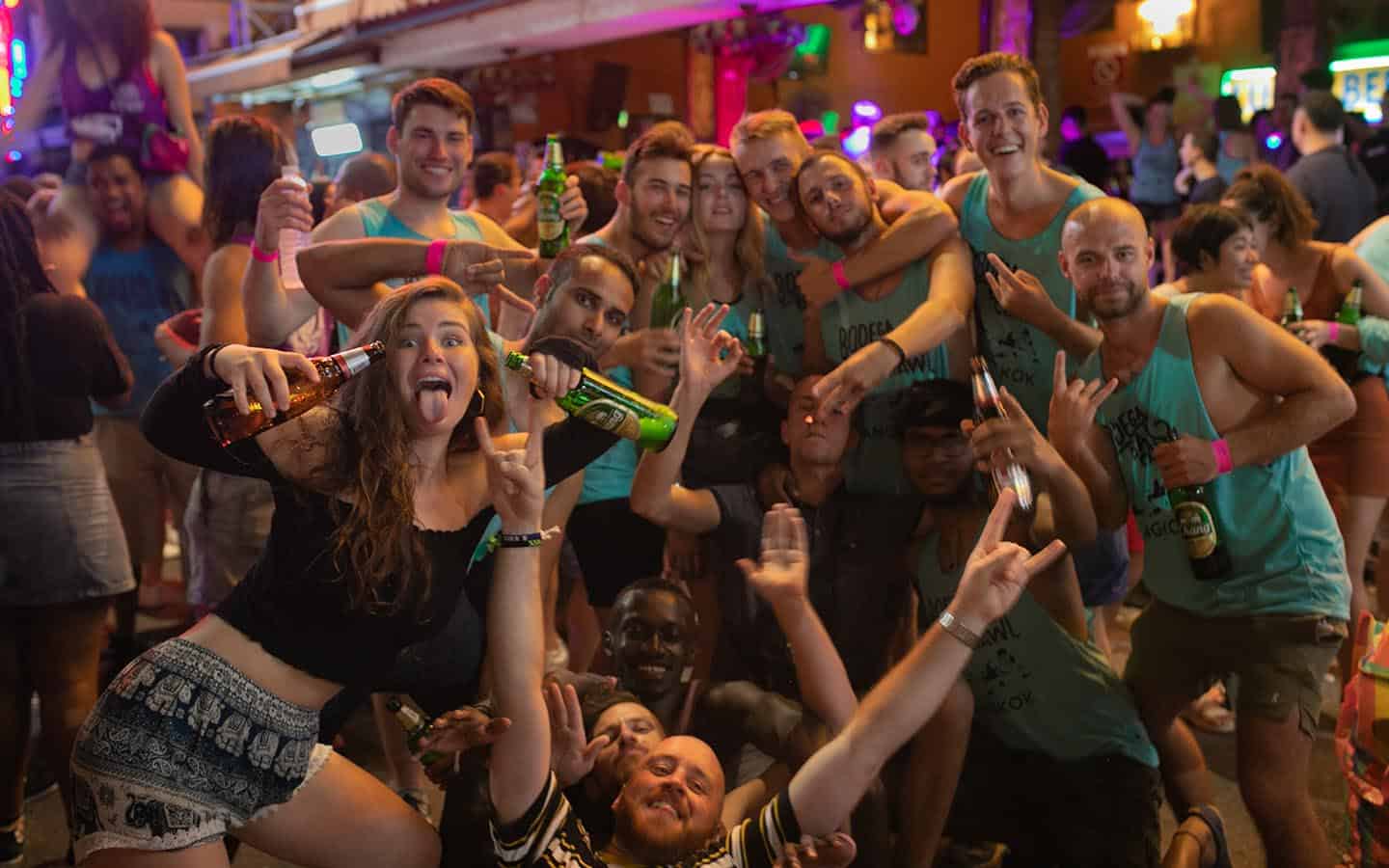 Khao San Road is everything you’ve heard about backpacking.

When it comes to Thailand and backpacking, Khao San Road is one and the same. This road, in the heart of Bangkok is completely synonymous with the hedonistic, party loving, drink swilling, street food eating culture that is travelling through Thailand.

Is this traditional Thailand as it was years ago? Absolutely not. This is east meets west Thailand. This is a street that appeals to those who have just arrived in Thailand, having seen The Hangover 2, and are looking for a good time and a party until dawn. The Khao San party hostel vibe is everywhere in Thailand but it’s worth at least a day of your trip to experience it firsthand.

It’s no surprise that this street, therefore, is adorned with endless bars, street food stalls, cheap hostels and restaurants that are open until the last person leaves. Plus there’s a fair smattering of Thai souvenir stalls and plenty of massage stalls. Expect to see everything from elephant pants to deep fried scorpions on a stick, intricately carved soaps to Leo beer drinking vests (you won’t need one for long after you get your Bangkok Pub Crawl one…).

Interesting fact for you to share with your new beer buddies when you’re on Khao San. The name means milled rice, which came to use during the height of the rice trade. The very first establishment to open was a small hotel which served those travelling and investing in the rice trade.

Where is Khao San Road?

You’ll find this travelling focal point within the old city (Rattanakosin) within a stone’s throw of major attractions such as The Grand Palace and Wat Phra Kaew. Being only a block or so away from the Chao Phraya River there are plenty of travel connections as well.

If you’re staying away from Khao San Road then you’ll find plenty of different options to get there. Of course, there’s always the friendly neighbourhood tuktuks and taxis, but expect to pay a hefty fee the moment you say Khao San. One of the cheaper options might be to use ride hailing apps such as Grab to get a fixed price ride for a fraction of the price. If you do end up in a typical taxi, don’t accept the extortionate 200-300 baht prices that they quote, just move onto the next cab.

By boat, Chao Phraya Express Boat is going to be not only one of the cheapest options but also one of the most scenic. You’ll want to jump off at the Phra Arthit pier. Get to know this pier as it’s a great place to jump onto local tours, river cruises and also a handy transport link.

There are hundreds of buses that wind their way either nearby or close to Khao San, including airport link buses which run as an express direct from Suvarnabhumi Airport to the end of the road. These aren’t as cheap as local buses but they’re really convenient if you’ve just got off a long flight.

As we’ve alluded to above, this isn’t going to be your traditional Thai market where you can buy handcrafted souvenirs. Most of the stuff here is made on an industrial scale with the aim of selling as much as possible to tourists. What you will get, however, is lots of typical Thai travelling gear which means you can tick off plenty of cheap souvenirs.

There’s everything here in terms of clothing, elephant pants and beer branded t-shirts are just the starter. You’ll be able to grab everything you’ll need for a short trip, in fact you could come with an empty suitcase and $20 in your pocket and probably survive your trip in relative comfort.

If you’re a man, expect to be approached by an endless stream of touts looking to sell you a tailored suit. Our advice is to ignore them and walk on, even if you’re in the market for one. Instead head for a shop fronted establishment more in the center of town, or wait until you’re in another area of the country altogether. If you’re a lady with man, expect to be hassled by the same touts as they slam your friend/partner’s clothing choices.

There are also plenty of second hand book shops. Worth noting if you didn’t bring a guidebook or are looking for a guidebook on a particular area in Thailand or South East Asia. They’re actually pretty affordable but expect to pay a premium for recent editions.

You’ll also notice that there are many different tattoo establishments. These are either western style tattoo gun places or traditional Thai bamboo tattoos. If you’re genuinely considering getting a tattoo make sure that it’s a reputable, clean shop with a track record they can prove. If it doesn’t feel right, it probably isn’t right, and it’s not worth messing around with needles.

This is where most travelers to Thailand sample their first Thai beer, their first Sangsom and, perhaps, their first bucket. Khao San Road has become a party capital in Thailand. It’s cheap. Real cheap. There are endless deals in all of the different bars with happy hours starting and finishing at all times of the day. Expect to pay minimal prices for local beer and buckets come cheap too, especially if you’re sharing.

“What’s a bucket?” We hear you ask. It’s a literal bucket, or small pail, that is filled with at least a few shots of liquor, usually Thai whiskey, then topped up with Coke, Sprite or, infamously, Thai Red Bull known as M150. This stuff packs a punch and is not to be taken lightly, expect it to keep you awake and get you hammered.

You’ll also regularly see bars offering balloons with NO2 in them, also known as laughing gas. It’s worth knowing that whilst the bars sell them, they’re illegal. Bodega strongly recommends that you don’t bother. For a 30 second high you could end up paying a lot more than you initially parted with. Thailand’s police also aren’t famously relaxed when it comes to travelers taking drugs…

The food here is great. For many, it’ll be their first street food experience and it’s a great place to start. We would highly recommend going for the classical Thai favorites to ensure you’re getting great flavors. Pad Thai, prawns/chicken with beansprouts, lime, chili and peanuts over noodles is superb and goes a long way to keeping you full for barely any money at all.

From the street stalls, grab a few skewers of deliciously marinated satay meat and chow down as you meander your way along the street. For those looking for a fresh taste, we’d highly recommend trying green papaya salad (Som Tam), just be sure that you have your Thai phrases handy to control the amount of heat that goes into it.

For the adventurous among you, there are plenty of stalls selling all kinds of bugs and grubs for you to snack on. If you’re looking to show off then grab a whole scorpion on a stick. For those just after a snack, ants are a good place to start and taste a bit like salted peanuts. The water bugs, however, well… there hasn’t been a good review of them yet.

So you’ve survived a night out on Khao San and are looking for a bit of culture before the next pub crawl tonight? We admire that. You’ve got something special about you. Thankfully, you won’t have to travel all that far to get in some world class tourism sights.

Not too long a walk is the sprawling Grand Palace complex. This is a major bucket list item for thousands and thousands of travelers each year. The crowds are big, but they’re worth contending with. You’ll struggle to find a more spectacular, ornate and beautiful temple.

Nearby to the Grand Palace is Wat Phra Kaew, also known as The Temple of the Emerald Buddha. This Buddha statue is arguably the most revered in all of Thailand and draws in both pilgrims and tourists alike. It’s really quite small, but has quite a story to tell. It’s only 66cm tall but is carved from a single piece of jade.

This is a place that should be on your traveling bucket list. It’s touristy, yes. But that’s part of the charm. And can you say you’ve even been to Thailand if you haven’t had a bucket on Khao San Road? Probably not.

All Posts »
PrevPreviousInside the Best Temples in Indonesia: Homage to Elder Civilizations
NextSimple (Yet Effective) Ways To Secure Your Car While On VacationNext