Anything But The Last King: How to Play King’s Cup 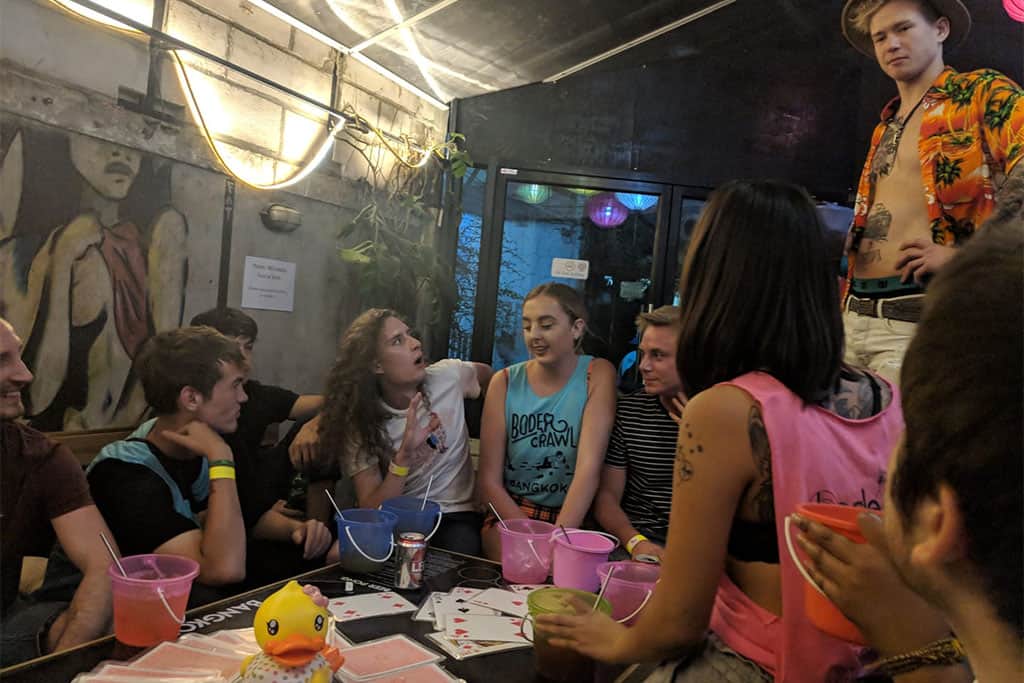 How to Play King’s Cup AKA The Ring of Fire

Ahh drinking, it’s great isn’t it? We love to have a nice cool and relaxing Leo whilst watching the sun go down. A perfectly muddled Mojito? Sure thing. An elegant glass of wine with canapes? Hell yes. That’s all great and everything, but sometimes you just want to get absolutely hammered with your best buds. That, our friends, is where King’s Cup, one of our favorite hostel drinking games, makes a drunken entrance.

Once you learn how to play King’s Cup, it becomes your favorite way to get drunk quickly. The dares people put each other through, the sheer amount of alcohol consumed…it’s just beautiful. If you want

King’s Cup – The Outline of The Game

Sit in a circle with a table in the middle. Place a large cup, mug, bucket or plant pot in the middle of the table. Around the outside make a perfect circle of 52 cards without a break in the circle. Each player takes a card in order. Every card has a particular action/punishment/drink attached to it. The game continues until the last card is drawn and/or the 4th King is withdrawn – but we’ll get onto that again later.

What does each card mean in King’s Cup?

Let’s start from the bottom and work our way up. In this case, Aces are low.

Keep in mind that the rules of King’s Cup are very regional (across the flat earth) as well as between Bodega locations, so don’t consider the following rules set in stone. In fact, just reading them now, I’ve seen that the last time I played looked very differently!

Ace – Waterfall – Everyone stands up, drink in hand. The person who drew the card begins to drink and causes a waterfall around the circle. You continue to drink until the person on your right has finished drinking, even if that means you end up finishing you whole drink.

Two – You – Your good-natured self chooses a person to drink. Share the love.

Three – Me – You drink, enjoy it. We don’t want you getting thirsty now do we?

Four – Whores – All ladies present in the game are requested to drink together in a show of strength and unity. At least 2 fingers each per drink.

Five – Bust a Jive – You become the dance master. You don’t have to play this card immediately and can hold onto it for as long as you see fit. At any given moment you can play the card by busting a move. It can be any dance move you choose. Jive, salsa, floss, whatever you fancy. The last person to perfectly mimic you has to drink.

Six – Dicks – As with the whores card, all gentlemen playing the game are required to drink.

Seven – Heaven – When the card bearer points at the sky the last person to do so has to drink.

Eight – Mate – This card can cause carnage when played in sequence. A player picks one player to be their mate. Simply put, when you drink, they drink. Even for punishments. The beauty comes when that player also gets a mate card and chooses another player. This creates a drinking form of the mobile game Snake. Drinking with friends is fun, isn’t it?

Nine – Rhyme – The player picks a word and working around the circle, each player has to rhyme a word with it. If a player can’t then they lose and have to drink.

Ten – Categories/Name 10 – The player picks a category. For instance, makes of car or sex positions. Each member of the group has to come up with an item that matches the category, and if they can’t then they drink. If it makes it around the circle then the card bearer drinks.

Queen – Questions – The card owner asks a question to anyone in the game. That person then ask a different person a different question. You lose by answering the question or laughing.

Hurrah! The game is ended, rack up the cards again and away you go!

King’s Cup, The Drinking Game for Everyone

The best way to learn the game is just to play. It won’t take you long to get into it and before long you’ll be obsessed. You’ll be making up your own version of the rules and you’ll be, arguably most importantly, insanely drunk. That makes us all winners.