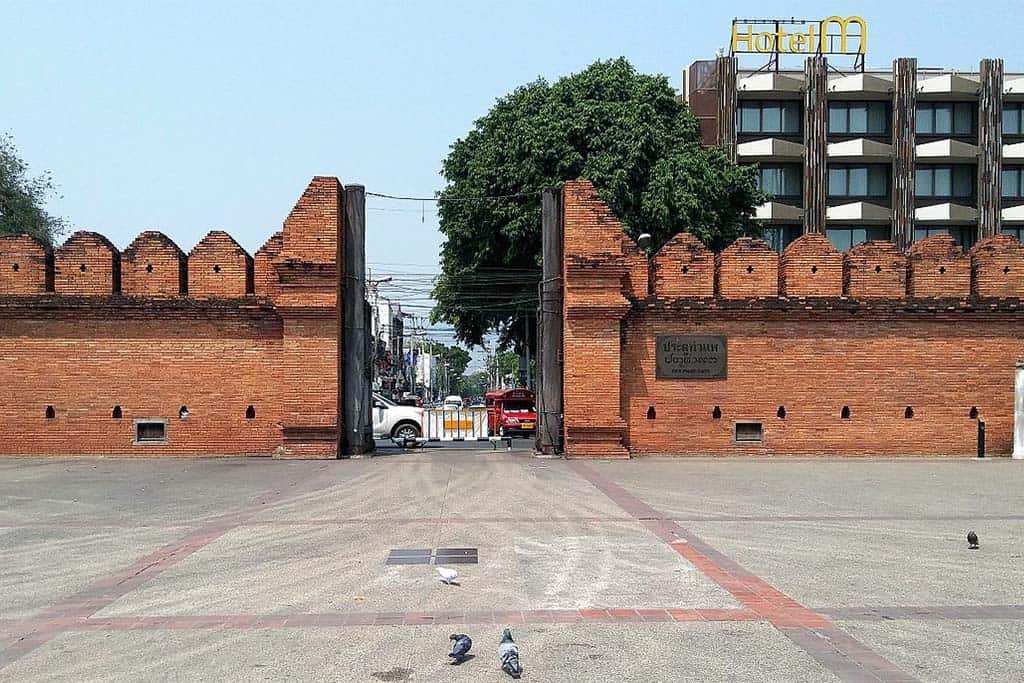 It’s one of the most recognizable sights of the north, but what about the history of Tha Pae Gate in Chiang Mai? What’s the purpose of the fortified wall and when was it erected? The Tha Pae Gate of Chiang Mai has a long history that has grown as the city has itself.

The gate itself is part of the lengthy, now crumbling wall of the old city. This area wasn’t always referred to as the old city, and was once the entirety of the city. Nowadays, it’s the tourist hotspot with the highest concentration of boutique hotels, affordable hostels, endless restaurants and huge night markets.

The Tha Pae Gate is right in the heart of Chiang Mai and is a useful attraction to use as a landmark when moving around the city. From there you’ll be able to explore the whole of the old city as well as nearby temples and attractions that border the wall. Arguably, one of Chiang Mai’s biggest attractions, the Sunday Night Market, takes place entirely within the old city just a stone’s throw from Tha Pae Gate.

Just in front of the gate is a wide public space which is often host to bands, ceremonies, events and more. Come down on a Saturday night and you’ll find it abuzz with vendors, food stalls and excitement.

The gate’s history stretches back hundreds of years to the 13th century. From the 13th to the 18th century Chiang Mai was the northern Lanna Kingdom’s capital city. As the city grew, so did the need to protect itself from foreign invasion and warring parties, namely the Mongol Empire from nearby Burma.

Whilst the walls have never been fully destroyed in conflict, small invasions, centuries of local and tourist climbing and natural erosion have left the walls in a poor state of repair nowadays with much of it being reduced to rubble. The main Tha Pae Gate itself remains almost wholly intact thanks to years of restoration works.

Towards the end of 2018 the Tha Pae Gate was thrust into the news headlines worldwide after a pair of foolish tourists decided to spray graffiti onto the ancient gate. This unbelievably stupid act was carried out by a Brit and Canadian and was entirely caught on CCTV. Plus, they decided it was a good idea to spray paint their own names onto the gate…

The local population and police force reacted with furious anger and the pair were threatened with 10 years in jail and up to $25,000 worth of fines. After a court proceeding the paid escaped jail and were forced to pay over $5,000 in damages. Our advice? Just enjoy visiting the landmark for its historical value and don’t go vandalizing this ancient place. Especially not with something as stupid as “Scouser Lee”…

Head for the eastern side of the old city, you’ll find the gate in between Rachadamnoen Road, and Tha Phae Road. Thankfully, it’s barely any distance from Bodega Chiang Mai so you’ll have no problem making time to visit this place of ancient Thai history.

All Posts »
PrevPreviousHow to Get to Koh Tao: One Way Ticket to Paradise and Cheap Diving
Next5 of the Best Late Night Clubs in Bangkok: The Party Don’t StopNext