Chasing the Bangkok Sunset: The Night Begins with Cocktails and Gold 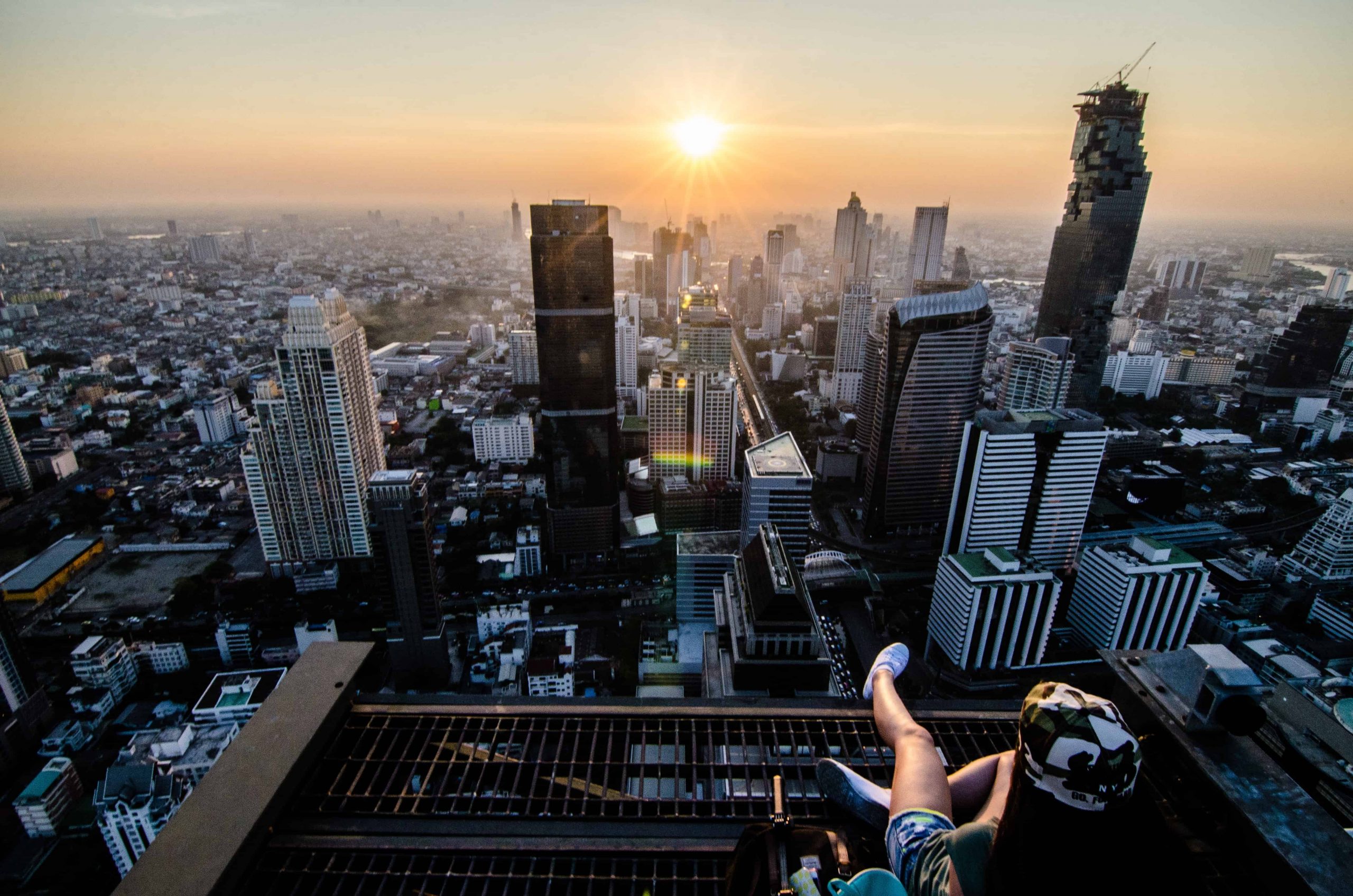 Drinks with a View: Where to Watch the Bangkok Sunset

Bangkok may be better known for its heat (literally the world’s hottest capital city) and amazing diversity of food (the Khao Kaa Moo, or Pork Trotters Rice,delicious satay) but the sunsets in Bangkok were what will really blow you away.

See the sunset from Bangkok’s Temple of Dawn

Temples in Bangkok are everywhere, with literally hundreds of them in the city. Most of which date back all the way to the Rattanakosin era (after 1782). Easily the most famous and most visited temple (for good reason), is Wat Arun. The temple derives its name from the Hindu god Aruna, often personified as the radiations of the rising sun, and translates as the Temple of Dawn.

Before you start panicking though, we’re not going to tell you to get out of bed for a 5am start, we actually think Wat Arun is much better seen at sunset. If you think your body might benefit from a walk up the 70-80m central prang or tower (to sweat the night before out), start there in the late afternoon when the crowds have died down.

The top does offer amazing views across the eastern bank of the Chao Phraya river but you can always meet your mates back at the bottom, on the other side of the river, to watch the sun set behind the pearly seashells and bits of porcelain. Remember to bring the beers!

Live an hour of luxury at Bangkok’s Skybar

While the Lebua State Tower might not be the usual cup of tea for the average party traveler, we all deserve a little bit of luxury every now and again, right? Just be sure to put your blinkers on as you zoom past the fine dining restaurants (the fried cockroaches from the street vendors are much better anyway).

Once you get to the top, the views from the Skybar are truly magical. The cocktail might cost you your daily budget so make sure you savor every sip (Jameson on the Rocks, around 470 baht). Slip your shoes off (no flip flops allowed), lean back and watch that beautiful sun set over the crazy city below. And before you go, be sure to grab a shot of golden dome against the deep blue sky (definitely one for Instagram).

If you don’t fancy Lebua State Tower, there are plenty more bars-with-a-view that will get your followers wishing they were you.

If you want to see the sunset like a local or you’re not keen on heights, Wat Arun or the Skybar might not be for you. Instead, avoid the posher tourists (you probably won’t get away from tourists altogether) and check out what’s going on in some of Bangkok’s coolest streets.

Soi Cowboy might not be the place for everyone, but for a sneak peak into Thailand’s more debauched nightlife head down to this red-light zone to find out what happens when the sun goes down.

If that’s not your scene, why not head down to Bangkok’s Chinatown, packed full with market stalls, restaurants and gold shops? As the sun sets, the numerous shop signs with their Chinese characters become even brighter, and hordes of gourmands descend onto Yaowarat Road to taste the delicate (often weird) cuisine.

Wherever you end up, the sunset in Bangkok promises an Insta Pic of the day.

All Posts »
PrevPreviousThe Best Spots for Yoga in Bali: All You Need to Know
NextExploring Angkor Wat Temple Grounds: The Jewel in Cambodia’s CrownNext