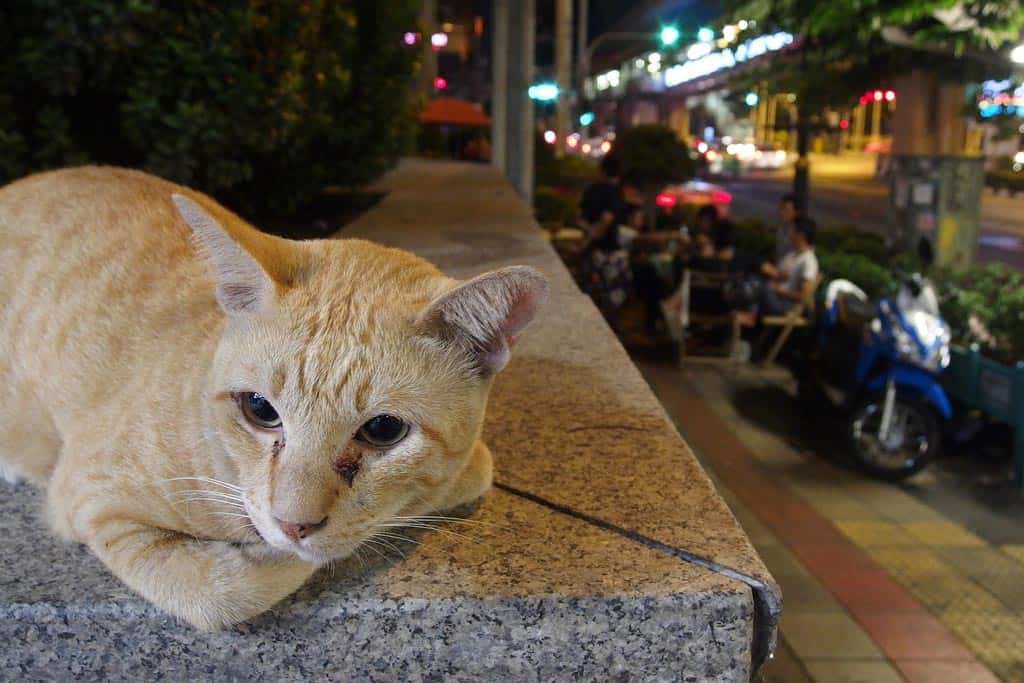 Asoke Cat is the First Feline Celebrity of Thailand

Chances are you’re wondering who and what this article, “The Death and Resurrection of Asoke, Thailand’s First Celebrity Cat” could possibly be about. Think of Thai celebrities and you’re likely to think of Araya Hargate and Tony Jaa, or any number of other film and TV megastars. But what about Asoke, have you heard of him? Probably not, but with a fan base of 3 million he’s big news in Thailand and has just undergone a dramatic alleged death, and then resurrection, all played out live on social media.

If that all sounds a bit weird then you ain’t heard nothing yet. Asoke is actually a cat!

This modern-day feline hero was once just another of the straggly, stray cats that you see daily down the side streets and sois of Bangkok. Asoke’s story started under the Asoke BTS station platform (super close to Bodega Bangkok), where he lived, played and fought amongst rest of the city’s stray cat population. He managed to pick up 50,000 fans on Facebook while he was still a stray though, just by posing for photos with passers-by. He was a crowd-pleaser from the start!

Asoke’s star was in the ascendancy however, and after losing a particularly vicious fight he was spotted by social media fan Nutch Prasopsin who took him home and adopted him as a pet. His adoring fans panicked when he disappeared from the station, so when he reappeared online as a local celebrity the crowd went wild!

These days, Asoke isn’t just a cat who posts pictures of himself on Instagram, he’s much more than that. His Facebook page Kingdom of Tigers has over 3 million followers and likes and in 2017 he launched his own lingerie line alongside Thai underwear makers Sabrina. He’s even featured on the front cover of Praew magazine alongside Araya Hargate!

His owner, Nutch, has also used him to promote awareness of the problems of stray animals in Thailand so his influence has helped improve the lives of many of his former station buddies. The Soi Dog Foundation is a great choice of charities in Thailand if you’re more of a dog than cat person for example.

PS: If you’re backpacking through Thailand and ever feeling down, one of the most wholesome moments you can experience is buying some meat skewers from a street food vendor and finding some malnourished stray dogs to feed them to! 💘

The (Alleged) Death of Asoke

With a pedigree as strong as Asoke’s, it’s no wonder that Thailand went into meltdown in early February when he appeared to die. In a video. Live on Facebook! Tucked up under a vet’s blanket, Asoke was clearly struggling, and the video had an air of a ‘goodbye’ about it as it he fought chronic kidney disease. As the video ended the tributes began, and distraught fans began leaving messages of condolence for their departed idol.

Fast forward to the next morning however, and all was not as it seemed… A post appeared on his page saying that despite being gravely ill, Asoke had rallied his strength and pulled through the night and was in fact making a reasonably efficient recovery! The crowd went wild once again as he rose from the grave and regained his position as number one cat in Bangkok.

And so in world so full of doom and gloom, Asoke has captured Thailand’s imagination as a celebrity worth loving. His rags to riches story has made him a nation’s favorite, and his resurrection after a sad and public death has only served to cement his appeal. Asoke we salute you, and may you continue to rule Bangkok for many years to come!

All Posts »
PrevPreviousFish Out of Water: The Best Seafood Restaurants in Phuket
NextReflection on a Week-Long Stay at Bodega Chiang Mai ThapaeNext