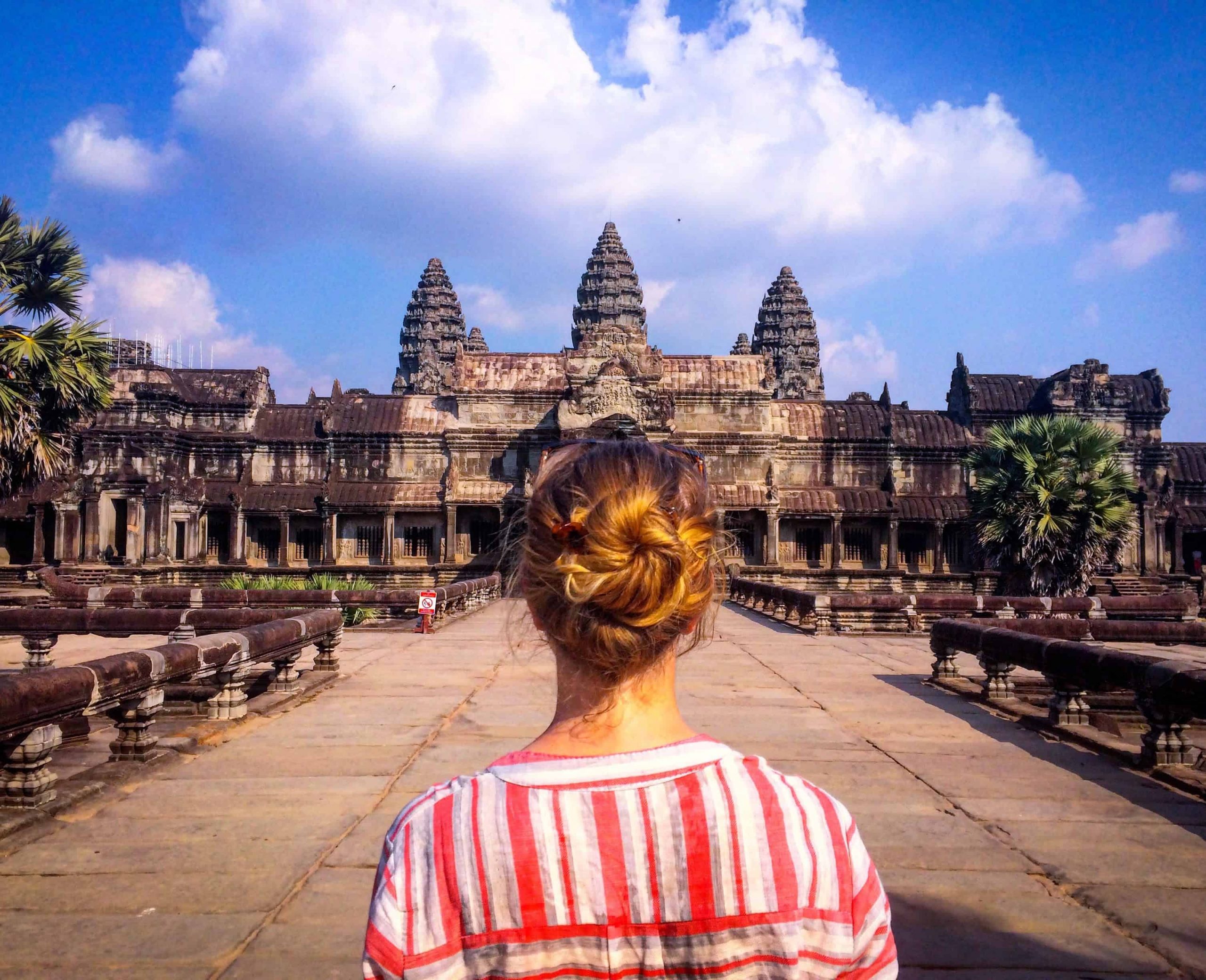 Visiting the Angkor Wat Temple Grounds for the First Time

Angkor Wat temple has long been one of the world’s greatest tourist attractions and with our handy guide to the ancient city you’ll be ready to take the historical site and make the most of your visit.

This vast ancient city is a massive site and now all that remains of what was once the center of the whole of the Khmer empire. The Khmer was not an empire to be messed with and, at its peak, spanned across great swathes of South East Asia.

Once the civilization went extinct, all that was left were their buildings which were slowly but surely reclaimed by the jungle. Here they laid dormant without visitors for centuries before being uncovered and properly excavated.

Nowadays, you’ll never be alone here. In fact, you’ll be among thousands of other visitors no matter what time or day you visit. But is it worth the effort, the money and the crowds? It sure is! It’s hard to think of a more incredible attraction at this vast a scale, with this much history and this much atmosphere. Miss it and you’ll feel like you’ve missed out for years to come.

Planning Your Trip to Angkor Wat

If you’re planning on visiting Angkor Wat, chances are that you’ve made it as far as Siem Reap. This relatively small town (for SEA) is busy, loud and polluted…but is also a whole lot of fun and incredibly convenient for visiting the ruins.

The airport is just outside of town and has many regular flights to local major destinations and further Asian cities, even as far as Manilla in the Philippines. We would suggest staying in the main city center. If you don’t, you’ll end up spending more on taxis to get in to the local restaurants and ever famous Pub Street.

Pub Street is a real travelers’ gem. Endless restaurants, endless bars, and gentle buzz that doesn’t get too raucous but is a great night out. It’s comparable to Khao San Road or Bangla Road, but honestly it’s much better bang for your buck. The local bars and restaurants are continuously trying to better each other with their range of offers to customers. Two beers for $1 is a regular occurrence with some fantastic bar snacks alongside. We highly recommend keeping an eye out for the thin mushrooms wrapped in bacon. Perfect alongside a frosted glass of beer.

When it comes to arranging the trip itself, you’re not going to have to look far. The moment you step onto the street (especially mid afternoon) you’ll be harangued by tuk tuk drivers, rickshaw riders and minibus companies looking to book you onto their next trip. Our advice: Take your time, trust us there are far more drivers than there are groups of visitors (hard as that is to believe…).

The best way to find the driver for you is to strike up a conversation. If they can hold a conversation with you then chances are that their English is decent. This is really important as they will act as your guide in between major attractions.

Last time we went we had a good chat with a guy who had a jazzy looking tuk tuk. We made sure to ask him a slightly complicated question and he nailed the answer. He knew exactly where our hotel was for the pick up and said he would bring at least 6 liters of water for us (in a cooler no less!).

Pick up should be from your hotel (or a local landmark) and, if you want to see the classic sunrise, should be at least an hour before scheduled sunrise time. You’ll get collected and taken to the ticket office first before heading into the site itself.

A visit to Angkor Wat doesn’t come cheap. In fact, as SEA attractions go, this is one of the most expensive tickets around.

As you can see, the more time you plan on spending the cheaper it gets. Realistically, one day is enough for the majority of visitors. That includes seeing sunrise and sunset and makes for a really long day. Three days will get you to some of the further afield and less visited sites. Seven days allows for a complete archaeological investigation of the site at your complete leisure. It’s worth noting that the 3 and 7 day passes don’t have to be used on consecutive days with the 3 day lasting for 10 days and the 7 day lasting for a month. If you’re into slow travel, this is your best option.

The park is open from 7:30am, with the exception of Angkor Wat, Srah Srang, Phnom Bakheng and Pre Rup, each of which opens at 5am for sunrise.

If you’re planning on seeing the sunset, to make the day more manageable you can grab your tickets the night before (after 5pm) and enter the park without using up any allocated time. This does lessen some of the wow factor but does ease some time restraints.

The Core Attractions of Angkor Wat

The site here is absolutely huge and it can be easy to miss major areas, smaller treasures or just get overwhelmed. Luckily for us, the Cambodian government has taken preserving ancient temples quite seriously. These are the unmissable postcard shots:

Angkor Wat Temple Grounds – This is the main attraction, the biggest religious building in the world, Angkor Wat is phenomenal in size, atmosphere and architecture. Built by Suryavarman, the 200 foot masterpiece is a sight to behold. Arrive early and get a great spot for sunrise in front of the pools, you won’t be alone so be prepared to defend your territory. Once the sun has risen, take plenty of time to explore the many levels of this incredible structure.

The Bayon – Also known as the temple of faces. The hundreds of smiling, benevolent faces of the Buddha are incredible to see and make for a fantastic set of photo opportunities. Highly recommended to view during the golden hour when light has just risen or is shortly setting.

Ta Prohm – Regularly referred to as Tomb Raider temple after Lara Croft’s exploits during the Angelina Jolie film. The jungle is still very much in charge here with huge towering trees anchoring the roots deep into the temple’s walls and facades.

Phnom Bakheng – Temple Mountain is aptly named and is the highest point in the complex. Flocked to for the sunset, the temple is ticketed and once it reaches capacity (which is small enough for it to feel uncrowded), then you won’t get in unless someone leaves. Turn up early if you want a good spot.

We mentioned earlier that getting a tuk tuk driver is relatively straightforward and is, by far, the most convenient option for visiting the site. You can expect this to cost around $25 USD per day but this can be split between 3 to 4 people so if you’re visiting with friends then the cost is dramatically reduced.

If you’re not interested in having a driver for the day other options are to rent a bicycle or cycle rickshaw. These are considerably cheaper options, starting from $2 a day, but will significantly reduce the amount that you can see in a day. Note that even if you have rented your own scooter for use in Siem Reap (which is regularly banned by the local government completely!) you won’t be allowed to use it in the site. If you do manage to get in with it, expect to be collected by security after a short while. We highly recommend against doing this, especially if you’re a solo female traveler. Travel smart and safe!

Food and Drink in Angkor Wat

There are many different options here. Outside every major temple site there will be a mobile seller offering cool drinks, ice creams and snacks (at a far higher fee than supermarkets of course). For larger snacks and meals, there are a series of restaurants throughout the site which open at different times. The best of these offer AC on the inside, hammocks and throw pillows with fans on the outside.

When you stop for lunch (around 11:30 – you’ve been up since 4 after all…) don’t be surprised if your driver suggests an hour or more for a stop. Trust us, you’ll appreciate the rest and will likely fall asleep. But after a quick Beef Loc Lac and a cool drink you’ll be right back to it.

Overall, the best way to experience Angkor is to simply go and just immerse yourself into it. These, however, are our top tips:

If you want an incredible tour of Cambodia before even visiting, Bodega highly recommends checking out Boudewijn’ flickr album. Great photos all around and it’ll give you a taste of how your backpacking trip will go!

Do you have any other tips for visiting the Angkor Wat temple grounds?

Leave them in the comments below!

All Posts »
PrevPreviousChasing the Bangkok Sunset: The Night Begins with Cocktails and Gold
NextDiving Spots In Asia That’s Going To Take Your Breath AwayNext